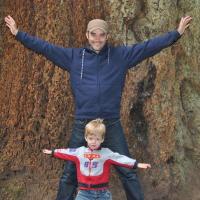 Member Since 04 May 2012
Offline Last Active Jan 28 2017 07:46 PM
Thinking about how to organise my learning. Hitting a wall and not producing anything I like lately. Updated 18 Mar · 1 comments

I grew up on Vancouver Island in a small town on the northern end.  In 1994 I trained to become a hairstylist and in 1998 I moved to Vancouver and continued to work in the same field until I met my wife in 2001.  In August 2006 my wife and I married and started our new life together.  In 2007 I decided that a new career was in my futuer, and with encouragement from my wife I went back to school to become a paramedic.  In 2008 I started a career with the British Columbia Ambulance Service and currently work with them as a paramedic and an emergency medical dispatcher.

2008 was a monumental year for us, not only did I start a new career, we also started a family.  We now have two young boys and are on our way to adding the third and final to the brood.  The oldest, three years old, cannot contain himself when he sees a new fly tying book arrive in the mail, or dad pull out the vice and materials.  I caught him at the vice one morning all alone, with an AJ Size 3 Spey hook I had left in the jaws.  He had managed to start the thread, and had added a gaudy length of sparkle braid with a wing of gadwall on top.  When he said he was done, I whip finished it and put it directly into a box for safe keeping.  In 20 years I'll post it on a forum much like this and I'm sure we'll all get a laugh out of it.

It wasn't until 2009 that I took an interest in fly fishing, and a desire to tie my own flies quickly followed.  I am still very very green when it comes to the sport, and try to learn from every source imaginable.  I am lucky to have made two very good friends who also share the same passion, and together we contrive to learn as much as we can about the new sport we love and the waters in our back yards.  It was 2010 when I first saw one of Don Bastians Ray Bergman flies, and instantly fell in love with the classic patterns.  Since then, a friend has turned me onto the art of classic salmon flies.

So it is now that I start the study of classic salmon patterns.